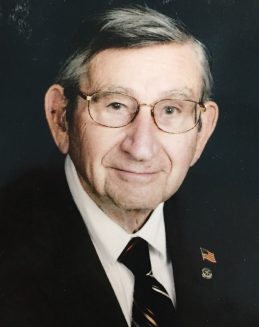 James Vernon Goar, Jr., 97, of Frankfort, passed away Sunday, January 15, 2017 at the Indianapolis Heart Hospital. He was born in Kirklin, Indiana, on December 30, 1919, to James Vernon Goar, Sr. and Elma Rebecca (Parker) Goar, who preceded him in death.

Jim was a 1938 graduate of Frankfort High School, and attended Earlham College until December, 1941, when he left school, spent Christmas with his family, and then immediately enlisted in the armed forces. A Captain in the US Army Air Corps, he served 1943-1945 in the 392nd Bomb Group of the 8th Air Force on a base at Wendling, England, Group Transportation Officer. After World War II, he returned to Earlham to finish his undergraduate degree in economics, and then earned an MBA at Harvard University.

Jim served the Frankfort community as a Realtor for 63 years, taking over in 1954 the business his father founded which later became Goar Associates. He was a member of the Clinton County Board of Realtors, the Indiana Board of Realtors, and the Frankfort Rotary Club, serving in various leadership capacities in those organizations, as well as the Frankfort Development Corporation. He was a member of the First Evangelical Presbyterian Church, serving as a Deacon, Trustee, and  Elder. In December, 2015, he was named a Sagamore of the Wabash by Governor Mike Pence for his long years of community service.

In his later years, Jim was President of the 392nd Bomb Group Memorial Association, and a member of the 8th Air Force Historical Society.  In addition to his presidential duties, he edited the Group’s newsletter for many years.  Along with serving as reunion groups,  both groups are dedicated to preserving the memory of the contributions of World War II veterans, as well as extending that knowledge to later generations. Jim enjoyed attending reunions, catching up with old comrades and meeting new ones with whom he did not have the chance to serve.  He was instrumental in the establishment of the National Museum of the Mighty Eighth Air Force in Pooler, Georgia.

Visiting will be Friday, January 20, 2017 from 12 Noon-2 p.m. Friday with the services beginning at 2 p.m. at the First Evangelical Presbyterian Church, 352 W. Clinton St., Frankfort. Private family entombment will follow at Oak Hill Cemetery Mausoleum in Lebanon, Ind. Memorial contributions may be made to the 392nd Bomb Group Memorial Association. Checks should be made out to 392nd BGMA, and sent to Mrs. Annette Tison, 9107 Wood Pointe Way, Fairfax Station, VA 22039.