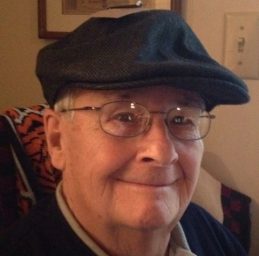 Jim was a 1955 graduate of Frankfort High School, attended elementary school at Kyger and was proud to be a “Kyger Kat”.  He was a lifelong Frankfort resident.  Jim retired in 1997 from the Norfolk & Southern Railroad (Nickel Plate) where he had worked for over 40 years.  Prior to the railroad, he worked for Ing-Rich for 2 years. As a child, Jim was a good athlete, much like his two older brothers. His athletic life ended when he suffered a compound fracture of his leg while pole vaulting. He enjoyed working for the railroad, except when it was cold. He was a fan of the St. Louis Cardinals and the National Parks. He loved music—early on Stan Kenton, Frank Sinatra or Willie Nelson but more recently Johnny Cash. He was a fan of history—especially anything to do with railroads, the Civil War or World War II. He loved to travel and drove his young family from Washington, D.C. to Florida to Niagara Falls to Gettysburg to Yosemite. He loved road trips–especially when he didn’t have to drive and could look out the window for Historical Markers. He liked maps and would invariably drag out the Road Atlas whenever someone mentioned a city or town they had visited. He enjoyed family vacations at the beach, both in North Carolina and Florida. He loved reading—two newspapers a day, magazines and stacks of library books. He enjoyed watching his kids, and later his grandchildren, when they played sports. He followed both IU and Butler basketball. He liked pancakes and biscuits & gravy. He liked playing golf, taking care of his lawn and feeding squirrels and the ducks at the city lagoons. When he was younger he liked Pabst Blue Ribbon, but more recently he preferred a bowl of popcorn. He really liked popcorn. And he was always there if his family needed him.

Visitation will be 4-7 p.m. Thursday, April 6, 2017 at Goodwin Funeral Home. Funeral services will be 2 p.m. Friday, April 7th at the funeral home. Burial will be in Bunnell Cemetery. Memorial donations may be made to the Frankfort Lagoons, c/o City Clerk/Treasurer, 301 E. Clinton, Frankfort, IN 46041 or Frankfort Community Public Library, 208 W. Clinton St., Frankfort, IN 46041.