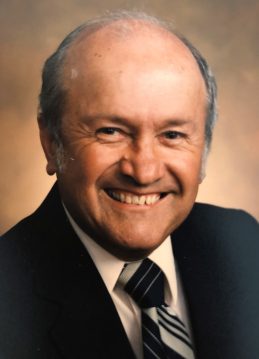 Jim was a graduate of Frankfort High School and attended Tampa Watchmaker School.  He was a watchmaker and co-owner of J & D Jewelry Store, in Frankfort, Ind. He was a veteran of the U.S. Army, during WWII and served from 1945-1947. Jim served on the Frankfort City Council from 1964-1968 then he was elected Mayor of the City of Frankfort, serving until 1972.  He was a member of the Moose, VFW, American Legion and the former Frankfort Country Club.

Jim was an avid golfer and greatly enjoyed playing in the Moose Golf League for several years with his grandson Ryan. Other interests include dancing, karaoke, ping pong and playing cards. He also enjoyed spending winters in St. Petersburg, Florida.