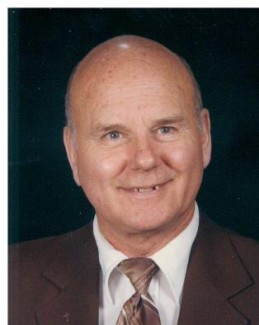 James H. Dick 94 passed away Tuesday, January 13, 2015 at IU Health Hospital in Lafayette, IN.  He was born on November 4, 1920 in Science Hill, Kentucky to Edward W. & Emma C. (Sipple) Dick.  Jim married Beula Maxine “Boots” Purciful on March 10, 1940 in Cyclone, Indiana.  She preceded him in death on September 22, 2011.  Jim worked as a Carman for the Nickle Plate then the Norfolk and Western Railroad.  He retired on March 18, 1979.  He was a veteran of World War II serving in the US Army in the Pacific Theater from 1944-1946.  He was a member of the Christian Holiness Church in Cyclone, also serving as Sunday School Superintendent, before its closing in 1995.  He currently was a member of the First Church of the Nazarene.

Funeral Services will be held at 1 p.m. Thursday, January 15, 2015 at the Goodwin Funeral Home. Friends may visit two hours prior to services. Entombment will be in Green Lawn Chapel of Peace Mausoleum. Memorials may be made to the First Church of the Nazarene.

In addition to his wife he was preceded in death by a Son, Jerry L. Dick, 6 Brothers, 3 Sisters, 2 Great Grandchildren and 1 Great Great Granddaughter.