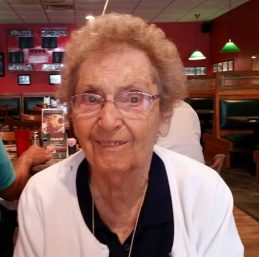 Irene Elizabeth McClure 89 of Frankfort, Indiana died on September 2, 2017 at 2:30 A.M. at Wesley Manor Retirement Community.  She was born September 29, 1927 in Martinsville, Indiana to Abraham Crook and Mary (Smith) Crook.   She married Mack Junior McClure in August 1944 and he preceded her in death on December 31, 2007.

She was a homemaker and previously worked at the Standard Grocery in Frankfort, Indiana and National Foods in Lafayette.  She lived in Wisconsin for over 40 years.  Upon retirement, Irene and Mack owned and operated the Ideal Café & Kozy Korner in Iron River, Wisconsin.  She was an active member of the Grace Baptist Church in Iron River, Wisconsin.  She was in several bowling leagues for over 25 years, played for many years in a golf league in Botten’s Green Acres in Wisconsin, longtime board member and volunteer at “The Fig Leaf” thrift shop in Iron River and was on the board for the Food Shelf and the TOPS Club in Iron River.

A visitation will be held from 1-3 p.m. Tuesday, September 5, 2017 at the Amanda Reid Chapel at Wesley Manor. Burial in Green Lawn Memorial Park will be held at a later date.

In addition to her parents and spouse she was preceded in death by her 2 sisters Helen Chandler and Wilma Galbraith and a son in law, Kenny Parker.