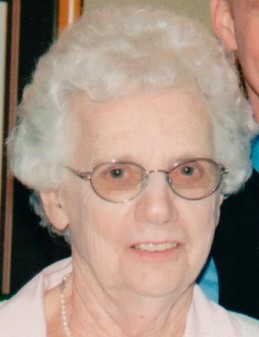 Iola Sterrett 93, Frankfort, IN, died at 7 a.m. December 3, 2013 at St. Vincent Frankfort Hospital. Born October 17, 1920 in Georgetown, IN to the late Otis H. & Mae (Ollis) Roy. She married Robert Sterrett on December 20, 1941 in New Albany and he preceded her in death on May 12, 1985. A 1937 Georgetown High School graduate and moved from Attica to Frankfort in 1965. Mrs. Sterrett was a member of Woodside Christian Church and was involved in Dorcas Women’s Circle. She was a member of the Eastern Star in Attica for over 50 years, Rebekkah’s Lodge, District Cookie Chairman and involved in Girls Scouts for 35 years, member of Golden Glo, a Red Cross Volunteer, Clinton House Health and Rehabilitation Activities Volunteer for 27 years, and a Pink Lady at St. Vincent Hospital for over 20 years. Mrs. Sterrett was an avid card player.

Visitation will be 6-8 p.m. Thursday, December 5, 2013 at Goodwin Funeral Home and on Friday from 10-10:30 a.m. with services following at 10:30 . A Rebekkah’s Memorial Service will be 6 p.m. Thursday. Burial will be in Wolfe Cemetery, Georgetown, Ind. Memorials in honor of Mrs. Sterrett may be made to the charity of the donor’s choice.

She was preceded in death by a brother and a sister.