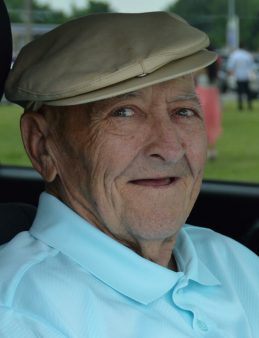 Hugh T. “Tim” Ballard Jr., 74, of Frankfort, died at 10:03 p.m. March 13, 2017 at I.U. Health Arnett Hospital, Lafayette, Ind. Born September 28, 1942 in Tompkinsville, Kentucky, to Hugh T. Ballard Sr. and Freeda Page Shaw.  He married Alice King on August 14, 1965 in Frankfort and she survives.  Tim attended school in Tompkinsville, Kentucky.  He moved to Frankfort in 1962.  Tim worked at Harmesons/KayCo Company and also worked with A-Plus Lawn Care.  He enjoyed gardening, fishing, hunting and most of all, spending time with his two granddaughters.

Visitation will be 4-7 p.m. Thursday, March 16, 2017 at Goodwin Funeral Home. Services will be 10:30 a.m. Friday, March 17th at the funeral home. Burial will be in Bunnell Cemetery. Memorial donations may be made to American Diabetes Assoc. or Wesley Manor Good Samaritan Fund.

In addition to his parents, he was preceded in death by 3 brothers and 1 sister.