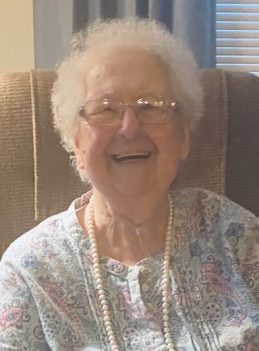 Helen attended Lebanon Schools.  Before and after marriage, she worked for Boss Manufacturing Co.  She was a homemaker, sold Dutch Maid clothing and Home Interiors, worked for J&L Steel, home healthcare, housekeeping for Turtle Creek Apartments, Panke Machinery Corp. for 5 years and was the Receptionist for C&T Hair for 30 years.  As a believer in the Lord, she was a member of Hopewell United Methodist Church and the Hopewell Friendship Club/Class.   She loved to read and play cards and was a member of several Euchre clubs in Mechanicsburg, Frankfort, Kirklin, and Michigantown.

Friends may visit from 1-3 p.m. on Friday, December 31, 2021 at Hopewell United Methodist Church, 3460 East County Rd. 500 North, Frankfort. Funeral Service will begin at 3 p.m. Friday at the church. Burial will follow in Hopewell Cemetery, Frankfort, Indiana. Memorial donations in memory of Helen may be made to the Hopewell United Methodist Church. Envelopes will be available at the church.