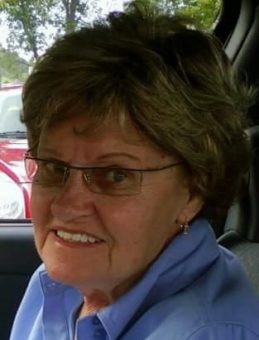 Hazel D. Affolter 86, of Frankfort, Ind., died at 5:25 p.m. September 2, 2016 at Clinton House Health and Rehabilitation Center.  Born July 7, 1930 in Burkesville, KY to Albert Lee & Velma (Long) Scott.  She married Franklin W. Gunter and he preceded her in death on January 15, 1971.  She married James Affolter on July 2, 1974 in Frankfort and he survives. Mrs. Affolter attended school in Burkesville, KY and received her GED.  She had previously worked at Harmeson Manufacturing and retired from Exide Battery.  She was a member of the Michigantown Christian Church.  Mrs. Affolter enjoyed baking, cooking and loved her grandchildren.

Visitation will be 4-7 p.m. Tuesday, September 6, 2016 at Goodwin Funeral Home. Services will be 11 a.m. Wednesday, September 7th at the funeral home. Burial will be in Bunnell Cemetery. Memorial donations may be made to Alzheimer’s Association.

In addition to her parents and first husband, Hazel was preceded in death by a daughter, Brenda Monroe, 2 sisters, Beatrice Hughes and Edie Eikenberry and 2 brothers, Ray Scott & Dean Scott.