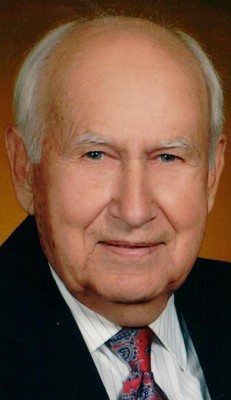 Gordon R. Mertz 88, a longtime Clinton County resident, died at 11:55 p.m. July 4, 2013 at the home of his daughter in West Lafayette. Gordon was born October 21, 1924 in Lafayette, IN to Fred E. & Stella (Eberhart) Mertz. At the death of his parents at age 8, he was raised by aunt & uncle Earl & Maude Eberhart. He married Jane E. Wilson on March 26, 1955 and she survives. Mr. Mertz was a 1942 graduate of Dayton High School. He grew up in rural Mulberry and Tippecanoe County and moved to Frankfort in 1986. A self-employed farmer, he farmed in Tippecanoe and Clinton Counties for over 50 years, retiring in 1989. He was a member of the Jefferson United Methodist Church for over 80 years and was past church trustee and Sunday school superintendent. Gordon was past member of the Elks Club, formerly active in the Clinton County Rural Youth and a member of the Clinton County Square Dance Club (The Promenaders) where he had taught over 125 couples how to square dance. He loved woodworking, especially with walnut wood. In September of 2011 Gordon named a stream (Deer Run Creek) which was 3.5 miles long which was located on his property in Clinton and Tippecanoe County.

Friends may visit from 2-5 p.m. Sunday, July 7, 2013 at Goodwin Funeral Home. Services will be 2 p.m. Monday, July 8th at the funeral home. Burial will be in Fair Haven Cemetery, Mulberry. Memorial donations may be made to the Jefferson United Methodist Church.

He was preceded in death by a brother, Robert Mertz.