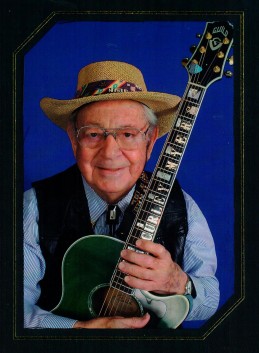 Gerald L. “Curley” Myers 93, of Mulberry, IN, known by all as your “ole” Buckaroo Buddy, died Sunday May 19, 2013 at 2:42am at the Mulberry Health and Retirement Community, Mulberry, IN. Born April 1, 1920 in Boone County, IN to Clarence L Myers and Edna G (Snowden) Myers. Married: Algilee Wright on Nov. 24, 1940 in Clairmont, IN, she preceded him in death on Jan. 13, 2001. He then married Anne (Young) Gordon on Dec. 21, 2008 and she survives. Curley grew up in Clinton County, IN with a mixture of farm and small city life. Attended grade school in Forest, IN, and Frankfort, IN he graduated in 1938 from Frankfort High School. Music was a commanding influence from the early age of 8, as the years progressed, there was always musical activity, the Woodside Harmonica Band, the Hoosier Ramblers Band (1936-1938), the Semi Solid Ramblers, Cap’n Stubby and the Buccaneers (1939-1945), Shady Acres Ranch in Mulberry, IN (1949-1957), and then Curley spent over 15 years with WFBM-TV Channel 6 in Indianapolis as the ”Saturday Morning Cowboy”. Curley has spent well over 60 years pickin’, singin’ and grinnin’ in the field of entertainment. Curley moved from Mulberry, IN to Lafayette, IN in 1965 and was associated in sales with Culligan Water. Mr. Myers was a 50 year member of the Mulberry Masonic Lodge #618

Friends may visit from 4-7pm Wednesday May 22, 2013 at Goodwin Funeral Home with service there on Thursday at 10am. Interment to follow in Bunnell Cemetery. Memorials may be made to Frankfort Senior High School Music Department, envelopes will be available.

A brother Garnell Wayne Myers in 1949.