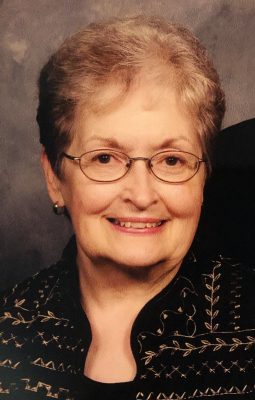 Georgia Arlene Richards, 84, a former Clinton County, Indiana resident, died September 28, 2022 in East Lansing, Michigan.  She was born November 5, 1937 in Clinton County, Indiana to Luther & Mary (Finney) Benge.  Her marriage of 64 years was to Jewell Richards on August 25, 1957 in the Country Chapel Church, Michigantown, Indiana. He preceded her in death on November 26, 2021.

Georgia was a 1956 graduate of Michigantown High School.  She attended Oregon Bible College in Illinois.  Outside of taking care of her boys and home, Georgia worked as an operator for the phone company and also worked for Mays Pharmacy when her boys were all in school.  Upon marriage, Georgia and Jewell resided in the Frankfort, Indiana area for several years where they started their family.  The family relocated to South Bend, Indiana for 8 years before settling into Williamston, Michigan where they resided for 40 years prior to retirement life in Winter Haven, Florida.

The joy of Georgia’s life was her children and grandchildren; she was so proud of each one. Faith and the church community were always important to Georgia.  She was actively engaged in the church throughout her life wherever the family resided.  Georgia loved to sing and play the piano; she came from a musical family.  They enjoyed afternoons singing gospel music accompanied by the piano, guitars and harmonicas with her brothers and sisters.

Visitation will be from 10-11 a.m. October 29, 2022 at Goodwin Funeral Home, 200 S. Main St, Frankfort, Indiana 46041. Funeral services will begin a 11 at the funeral home. Burial will be in Whiteman Cemetery, Michigantown, Indiana. In lieu of flowers, contributions may be to Country Chapel Church, Williamston Free Methodist Church or the American Cancer Association.

3 Condolences for “Georgia A. Richards”