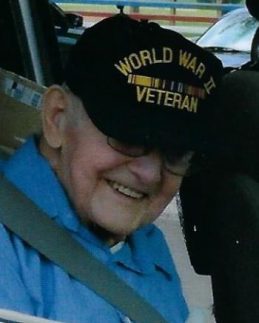 George F. Stewart, 92, of Frankfort, died December 9, 2018 at Wesley Manor, Frankfort, Ind.  He was born September 28, 1926 in Clinton County, Ind. to George A. & Estella B. (Beard) Stewart.  His marriage to Eileen Dorsey was in 1947.  Mr. Stewart was a 1944 graduate of Frankfort High School.  A veteran of WWII, he served from 1945-1946 in Germany.  He received the Army of Occupation Medal and the WWII Victory Medal. He was employed as a farmer, and was a bus driver for the Rossville Schools for 15 years, and then retired from the Clinton County Highway Garage in 1992.  George was beloved by many for his kindness, his merry twinkle and his sense of humor.  Many remarked upon his sweet smile and the genuine warmth behind it.  He enjoyed fishing with companions throughout life and taught his children to fish. A lover of music, he was a great dancer of ballroom, square-dance and fast dance.  The light of God was in him as one who accepted Jesus Christ in his life.  He is now home with God and having joyous reunions with all his dear family.

Visitation will be 4-7 p.m. Monday, December 17, 2018 at Goodwin Funeral Home, 200 S. Main St., Frankfort, Ind. Funeral service will be 10:30 a.m. Tuesday, December 18th at the funeral home. Dennis Riggs and Donna Enersen will officiate. Burial will be in Bunnell Cemetery. In lieu of flowers, donations may be made to Pleasant Hill Church in care of Goodwin Funeral Home.

George is survived by his much-loved children, son, Carleton Stewart and his wife, Gloria, of Gig Harbor, WA, daughter, Sandra Stewart Cox and her husband, John, of Urbana, IL, and a sister, Janet Rhine of Noblesville. Also surviving are many dear grandchildren, nieces and nephews.

He was preceded in death by siblings, Donald, Irene, Marguerite, Vera, Elizabeth, Mildred, and Joe.