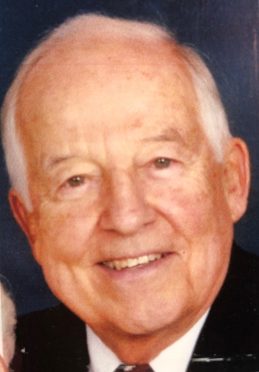 Frank A. Beardsley, Jr., M.D. was born July 8, 1925 in Clinton County Hospital to the late Frank A. Beardsley, Sr. and Mabel (Peterson) Beardsley and died peacefully on November 29, 2021 at Wesley Manor at age 96.  He lived a long and full life filled with much happiness and devotion to family and community.  He was rarely seen without a smile on his face, and he lived his life with optimism even through life’s hardships.

Frank was a product of Riley Elementary School and graduated from Frankfort High School in 1943.  He served as an Ensign in the United States Navy from 1943 to 1946.  On June 17, 1948, he married Maryann Burge, and they enjoyed 66 years of marriage through her death on January 10, 2015.

Frank graduated from Wabash College in 1949 where he was a member of Delta Tau Delta fraternity.  His medical education was at Indiana University Medical School where he graduated in 1954 and interned at City (now Eskanazi) Hospital in Indianapolis.  He began the practice of medicine in Frankfort in 1955 and would continue his career as a physician in service to his cherished patients through his retirement in 1991.  He truly loved the practice of medicine and his patients, and practiced in various areas of medicine including emergency medicine, obstetrics, and anesthesia in addition to his primary practice in Family Medicine in which he was one of the early doctors to be board certified in that specialty.  He worked tirelessly for his patients including countless house calls at all hours of the day, and he especially enjoyed caring for mothers and babies in delivery (for which they would express their gratitude for the remainder of his life).

Throughout his time in Frankfort, Frank was devoted to his community.  He was a member of First Evangelical Presbyterian Church where he served as an elder and a deacon.  He served as President of Frankfort Kiwanis Club and Frankfort Country Club and was a director of Lincoln Federal Savings Bank and the Clinton County Chamber of Commerce.  He was a member of the American Legion, Moose, Elks, Masons, and Symposiarchs, and played in the Fun Time Band.  Other significant civic contributions included founding of the Frankfort Medical Clinic, establishing the Key Club at Frankfort High School, and participated in the organization of Habitat for Humanity of Clinton County.  He was honored as a Clinton County Gem in 2013 and was inducted into the Frankfort High School Alumni Hall of Fame in 2019.

Frank was involved in many interests including golf, woodworking, playing the tuba for over 80 years, music especially big band music of the 1940s, RVing with Maryann and friends, and countless Indiana University football and basketball games.  He also was a devotee of legendary Frankfort basketball coach Everett Case and frequently gave programs on his life and career.

Visitation will be Friday, December 10th from 4-7 p.m. at Goodwin Funeral Home, 200 S. Main St., Frankfort and Saturday, December 11th from 10-10:45 a.m. at First Evangelical Presbyterian Church, 352 W. Clinton St., Frankfort, with funeral service to follow at 11 a.m. Private family burial will be in Greenlawn Memorial Park. Memorial donations may be made to the Boys & Girls Club of Clinton County, 1100 W. Green St., Frankfort, IN 46041.

Frank is survived by his sons, Richard (Dianne) of Carmel and Steven (Teresa) of Frankfort; his grandchildren, Matthew (Kristen) of Frankfort, Andrew (Theresa) of Zionsville, Margot (Taylor) Clark of Carmel, Natalie (Pete) Kostroski of Minneapolis, MN, Carl (Capri) of Scottsdale, AZ, and Meredith (Michael) Nekolite of Noblesville; 16 great-grandchildren; and 7 nieces and nephews.

He was preceded in death by his wife Maryann, sister Betty Hamborsky, and brother John Beardsley, M.D.