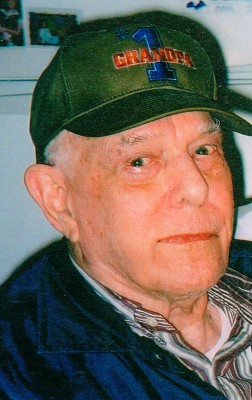 Ernest B. Reed 100, Frankfort, Indiana, Died April 2, 2016 at his home.  Ernie was born January 25, 1916 in Clinton County, Indiana to Jesse & Rosa (Fink) Reed.  His first marriage was to Geraldine Smith.  He later married Rebekah Webb on January 5, 1964 in Delphi, IN and she survives.  Ernest was a 1937 Graduate of Kirklin High School and then graduated from Bradley University in Peoria, IL with a degree in watch making.  He was a self-employed watchmaker from 1947 to 2000, he owned and operated Reed Jewelry Store & Watch Repair during that time.  He also was watch inspector for the Nickle Plate Railroad.

Please consider a memorial in memory or Mr. Reed to  The Frankfort Bible Holiness Church, 1947 W. Barner St., Frankfort, IN  46041.  You may share a personal message or order flowers for the family from this site.

Visitation will be 1-3 p.m. Wednesday April 6, 2016 at Goodwin Funeral Home 200 S. Main St. Frankfort, IN. Graveside services will be 3:30 p.m. Wednesday April 6th at the Green Lawn Cemetery Chapel of Peace, Frankfort, IN. Memorial donations may be made to the Frankfort Bible Holiness Church. Envelopes will be available at the funeral home or the Chapel of Peace. Goodwin Funeral Home is in charge of arrangements.

10 Condolences for “Ernest B. Reed”