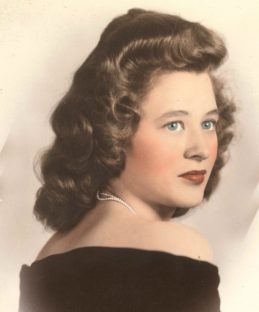 Elva Zae (Denham) Reeder, 88, of Frankfort died on Tuesday, November 13, 2018 at Mulberry Health and Retirement Community.  Born June 7, 1930 in Tompkinsville, Kentucky to parents Clarence and Anna Snow (Sewell) Denham.  Elva’s parents moved to Frankfort, Indiana when she was in elementary school.  While in high school, she worked at the Roxie Theater in Frankfort where she met her husband, Donald Keith Reeder.  Don decided he wanted to get to know her better and would show up at the movies, continually giving her wrong change.  They married on June 29, 1952 and moved to the country west of Frankfort.  Before having children, Elva worked at Coca-Cola and Glover’s Ice Cream.  Elva enjoyed a simple life which included gardening, canning, reading, napping, crocheting, sewing, baking, and collecting and trying new recipes.

Thanks to Mulberry Health and Retirement for their special help and care for Elva and Donald.

Memorial donations may be made to the Clinton County Humane Society.

Private Family Services will be held.  Burial will be in Green Lawn Memorial Park.

She is survived by her husband of 66 years, three daughters: Debra (Michael) Gosewehr of Lebanon, Joan (William) Hodgen of Michigantown, and Jeana (Scott) Scheurich of Lafayette; and a son: Robert (Debbie Hardebeck) Reeder of Jefferson;  14 grandchildren; and 28 great grandchildren.  She is also survived by sister: Ina Cook and brother: Fred Denham both of Frankfort.

Elva is preceded in death by her parents, son-in-law: Terry Jenkins, a brother: Rex Denham, and sisters: Alesa Allen and Alice Sharp.