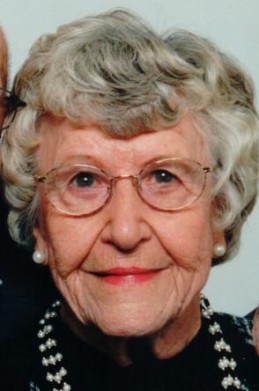 Elsie (Varner) Smith 94 of Frankfort, died April 5, 2016 at the Clinton House and Rehabilitation Center in Frankfort, Indiana.  She was born March 17, 1922 in Lincoln City, IN to Jason & Julia (Parker) Varner.  She married Donald I. Smith on December 3, 1941 in Hattiesburg, MS.  Don preceded her in death December 13, 2015.  Elsie attended Dale High School in Spencer County, Indiana prior to moving to Frankfort in 1938.  She retired from the P.R. Mallory Company in Frankfort after working there 32 years.  She was a member of the Women of the Moose #7.  She volunteered her time at Clinton House where she played music for the residents.  She enjoyed crafts.

The Funeral Service will be held at 2 p.m. Saturday, April 9, 2016 at Goodwin Funeral Home, 200 S. Main Street, Frankfort. Friends my visit from 1 p.m. until the time of service at the funeral home. Burial will follow in Green Lawn Memorial Park. Memorial donations may be made in Elsie’s honor to the Moose Lodge #7, with envelopes available at the funeral home.

She was preceded in death by 5 Brothers and 3 Sisters.