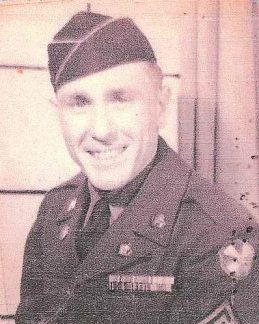 Elden L. Braden 93, of Frankfort, Ind., passed away at 6:28 a.m. August 16, 2016 at Mulberry Health and Rehabilitation Center surrounded by his loving family, including son Larry and daughter Tootsie. He was born on May 13, 1923 in Clinton County to Eldo Braden and Mary Ellen (Kirkendall) Braden. He married Ruth Maxine Lashbrook on July 2, 1955 at the First Christian Church in Frankfort, IN and she preceded him in death on July 17, 2015.  He graduated from Frankfort High School in 1941.  Elden was a proud veteran who served in the U.S. Army during World War II from 1943 – 1946 and was recalled in 1950 to serve as Master Sergeant in the Korean War until 1954. He received the Good Conduct Medal, Victory Medal World War II, American Theater Ribbon, EAME Ribbon with two Bronze Stars, Asiatic-Pacific Theater Ribbon and a Philippine Liberation Ribbon. Elden retired on June 8, 1984 after working 37 years as an engineer for Norfolk & Western Railroad. He was a member and regular attendee of Harmony Baptist Church.  He was also a member of the American Legion for 68 years, VFW, Masonic Lodge #54, 32nd Degree Scottish Rite, life member of the Elks and a Moose life member.

Visitation will be Friday, August 19, 2016 from 9:00-10:30 A.M. at Goodwin Funeral Home, with the Funeral Service beginning at 10:30 A.M. Pastor Wayne Martin will be officiating. Entombment will follow in Green Lawn Mausoleum with Military Rites. In lieu of flower, the family would like memorial contributions to be directed to the Clinton County Cancer Fund.

He was preceded in death by his parents, spouse and brother Ralph Braden.