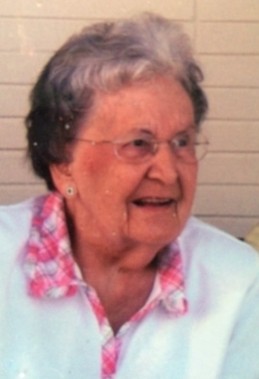 Edith R. (Henry) McKinney 97, of Clinton County, IN, died at 12:55 a.m. December 4, 2015 at Mulberry Health and Retirement Community.  Born June 21, 1918 in Fishers, IN to the late Thomas Edward & Laura Rebecca (Wiles) Henry.  She married Robert T. McKinney on June 6, 1941 and he preceded her in death on April 1, 2012.  Mrs. McKinney was a graduate of Goldsmith High School, Tipton County, IN. She completed Cosmetology School and was a licensed beautician, a bookkeeper and homemaker. In 1965 she and her husband moved to Rockville, IN, they returned back to Clinton County five years ago. Mrs. McKinney was a member of the Kirklin Presbyterian Church, Eastern Star, Tri Kappa and the Elks Lodge Auxiliary. She enjoyed sewing.

Funeral service will be 11 a.m. Monday, December 7, 2015 at Green Lawn Cemetery Chapel. Burial will follow in Green Lawn Memorial Park. Goodwin Funeral Home is assisting the family with arrangements. Memorial donations may be made to the Leukemia Lymphoma Foundation or Riley Hospital.