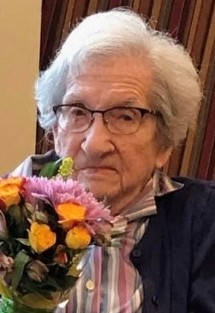 Cleo was a 1940 graduate of Scircleville High School.  She was a homemaker and worked in the school cafeteria in Colfax and Little Jefferson.  She also worked at the Colfax Meat Locker.  She was a member of the Colfax Christian Church for over 50 years.  She was also a member of Dorcas Society, and Clinton County Campers.  Cleo enjoyed traveling, gardening and canning, crafts and loved to tell her life story.  She was proud that all three of her children were still married to their original spouses and all married over 50 years.  Cleo was a loving mother, grandmother and great grandmother and a wonderful friend to many.  She will be greatly missed by all who knew her.

NOTE:  To protect each other, especially our friends at increased risk, please wear a mask.

Visitation will be 9-11 a.m. Saturday, January 22, 2022 at Goodwin Funeral Home, 200 S. Main St., Frankfort. Funeral service will begin at 11 a.m. at the funeral home. Paul Del Valley will officiate. Burial will be in Plainview Cemetery, Colfax, Ind. Memorial donations may be made to Colfax Christian Church, 314 S. Clark St., Colfax, IN 46035.

In addition to her spouses, she was preceded in death by a stepdaughter, Ollie Perlee, 6 brothers, 2 sisters and son-in-law, David Crouch.