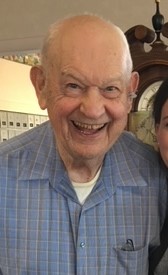 Dr. Carl W. Bollman 99 of Frankfort, Indiana passed away on December 26, 2022.  He was born in Nappanee, Indiana July 2, 1923, to George and Mabel (Johnson) Bollman.  He grew up in the area of Wakarusa, Indiana and graduated from Wakarusa High School in 1941.  In 1942, he attended the American Academy of Art in Chicago, Illinois.  Five months later, he was drafted to become one of the many who served in World War II in the South Pacific.

During the war, Carl was assigned to General MacArthur’s headquarters, the G-3 Plans and Operations department which was responsible for making the maps needed for all planned invasions, daily operations in combat areas and later for occupation of Japan.  While with MacArthur, he was stationed in Australia, New Guinea and on the island of Leytee in the Philippines.   The war ended during his leave, so he finished his tour of duty at Camp Atterbury.

Instead of returning to art school, Carl decided to become a dentist.  He graduated from dental school in 1951 rejoined the army as a First Lieutenant and as a married man.  He married Kathryn Lycas on December 17, 1950 in Indianapolis, Indiana.

Upon completion of his military obligation in 1953, Dr. Bollman and his family moved to Frankfort, Indiana to establish his dental practice.

Dr. Bollman retired at the age of 62.  He filled his life with woodworking, jail ministry, Bible study, travel, being with family, and fishing.  He bravely continued being a loyal IU fan in the midst of too many Purdue fans.

His faith as a Christian permeated his life.  Even though he had always been religious, he realized as an adult that he didn’t really have a faith in Jesus as Lord and Savior. He made the decision to put his trust in Christ after watching a Billy Graham Crusade on television.  He has never wavered from that decision and always desired and worked to further the gospel message.

This service will be live-streamed at 11 a.m. Wednesday, January 11, 2023.  To participate, please click the link below:

Visitation will be 9-11 a.m. January 11, 2023 at Goodwin Funeral Home, 200 S. Main St., Frankfort. Funeral services will be 11 a.m. January 11th at the funeral home followed by Military Rites. Burial will follow in Green Lawn Memorial Park. Memorial donations may be made to Clinton County Jail Ministry, P.O. Box 201, Frankfort, IN 46041.

His sister Ruth Hartman (Bill) and his children; John Bollman (Ruth) of Painesville, OH, Janet Bledsoe (Larry) of W. Lafayette, IN and Barbara Reyburn (Robert) of Hendersonville, TN. He is also survived by seven grandchildren and twelve great grandchildren.