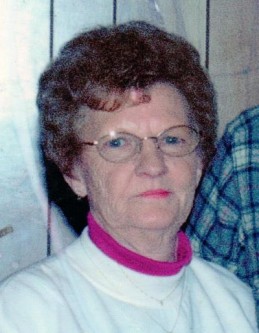 Dorothy M. Chambers Cox 76, of Kirklin, IN, died at 10:45 a.m. Saturday, February 22, 2014 at St. Vincent Frankfort Hospital. Born April 17, 1937 in Jefferson City, TN to the late Bryan & Alice (Gilbert) Chambers. She married Charles R. Cox on July 28, 1956 in Frankfort and he preceded her in death on June 29, 2006. Dorothy’s family moved to Clinton County from Tennessee when she was four and she was in the Frankfort High School Class of 1956. She worked at Peter Paul Cadbury for 17 ½ years and Zachery Confections for 12 years. She was a member of the Kirklin American Legion Ladies Auxiliary and the Frankfort Eagles Lodge Ladies Auxiliary. She and her husband enjoyed horse racing. She enjoyed gardening, her grandchildren and great grandchildren.

Visitation will be Tuesday, February 25, 2014 from 4-7 p.m. at Goodwin Funeral Home, 200 S. Main St., Frankfort. Services will be 10:30 a.m. Wednesday, February 26th at the funeral home. Burial will be in Oak Hill Cemetery, Kirklin, IN. Memorial donations may be made to the Kirklin American Legion Ladies Auxiliary.