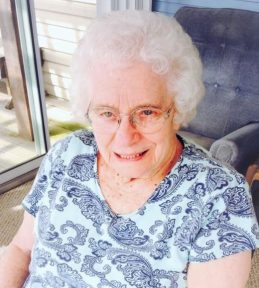 Doris Naomi (Goetsch) Minnich, age 91, passed away at home surrounded by her loving family on Wednesday, February 22, 2017 in Michigantown, Indiana where she had resided for the past two years.
Born in New Albany, Indiana on January 4, 1926, Doris graduated from New Albany High School in 1943. She continued her education at DePauw University where she was a member of the AOPi sorority, earning a Bachelor’s degree in Mathematics and a minor in German in 1948. Doris taught Math and German in Henryville, Indiana before marrying William C. Minnich on June 18, 1949 at St. Mark’s Evangelical and Reformed Church in New Albany, Indiana. He preceded her in death on December 11, 2013 after 64 years of marriage.
Doris and husband Bill raised their family first in Shoals, Indiana and later in Linton, Indiana and Fond du Lac, Wisconsin. Doris also taught in Worthington, Indiana and Fond du Lac before retiring in 1983 to the northwoods of St. Germain, Wisconsin. There, Doris and Bill operated Minnich’s Eagle View Resort which welcomed visitors for 29 years. Doris was an active member of the St. Germain United Church of Christ where she sang soprano in the church choir and made regular contributions to the church newsletter. Her favorite articles were her interesting interviews of church members.
Doris enjoyed cooking, watching her son Bill, Jr. play baseball, gardening, berry picking, playing the piano, reading, working crossword puzzles, cross-country skiing, cheering on the Green Bay Packers, playing card games and Scribbage, stock market analysis, observing the birds and abundant wildlife of the north, especially the eagles, loons, deer, chickadees, and pileated woodpeckers and, above all, spending time with her family and friends. She had a particular fondness for Gone with the Wind, both the novel and film, and recalled viewing the movie at the theater when it was first released in 1939. Beloved wife, mother, grandmother, great-grandmother, and sister, Doris always put others first.

The funeral service and burial will take place in St. Germain, Wisconsin in the spring. Bolger Funeral Home, Minocqua, Wisconsin is in charge of services. Goodwin Funeral Home is assisting the family with local arrangements.

In addition to her husband, she was preceded in death by daughter, Joyce, on January 26, 1979.

One Condolence for “Doris N. Minnich”