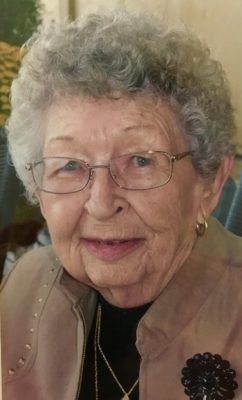 Mrs. Hoehn was a 1946 graduate of Alton High School in Alton, Illinois.  Soon after their move to Frankfort, Doris was a mayoral secretary for 8 years, which she considered her dream job.  She was a licensed insurance agent and together with Buzz, they owned and operated Hoehn Insurance until retiring in 1983.   They wintered in McAllen, Texas.   Doris enjoyed selling antiques and collectibles.  She was an avid reader, longtime Frankfort Zonta Club member, where she served two consecutive terms as President, and a member of the St. Matthews United Methodist Church.

Visitation will be from 1-2 p.m. Sunday, October 21, 2018 at Wesley Manor Chapel. Funeral service will begin at 2 p.m. at the chapel. Family burial will be in Bunnell Cemetery. Memorial donations may be made to the Boy Scouts of America.

She is survived by Buzz’s niece, Dr. Mary G. Moss of Rolla, Missouri, cousin Dale Rice of Bethalto, Illinois, cousin Charles Rice of Centralia, Missouri along with several other cousins.

She was preceded in death by her parents and one sister, Marjorie Ann Carr.