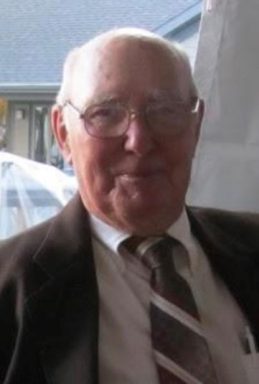 Donald Keith Reeder was born July 20, 1927 to Isome (Pat) and Dorothy (Robison) Reeder in Virgie, Ind. in his grandparents’ house.  Due to being born at his grandparents, his birth certificate was signed the day the doctor came to the house, which was the day before he was born.  Don grew up in Frankfort, but his summers were spent on his grandparents Reeder farm in Virgie, where he worked on the farm and raised chickens that would be sold at the end of summer to pay for his school clothes and books.  He also spent a great deal of time at his grandparents Robison farm in Terhune, where he learned to ride the horses to plow. From his time on the farms, he learned “gee and haw” and was an expert handyman at anything that needed fixed.  He met his wife, Elva Zae (Denham) Reeder at the Roxie Theater, where he was continually giving her the wrong change to attend the movies.  Don served two stints in the Korean Conflict, being drafted both times.  The first time he was a frontman artillery, but spent much time being a mechanic and also as a baker.  The second time, he talked about pushing to the north and having to run all the way back to the south while carrying all of his artillery.  He did not speak much of these times, but would mention very early morning phone calls from his sister, Barbara Jean, because she was a phone operator and just “wanted to see what he was doing.”  Don worked at Norfolk Southern as a electrician, Robbins Electric as an electrician and at Huston Electric as an electrician.  It was while he was at Huston Electric that he received his Master Electrician distinction.  He also was on the board of a small banking institution as it was just getting started.   Don was active in scouting, Amateur Radio, the Antique Machinery Club, Oddfellows, and was on the board of Camp Cullum.  Don enjoyed reading, gardening, was an avid hunter and fisherman, and spending time in his hammock.  He also fashioned a stage coach with homemade wooden wheels for his grandchildren to ride in behind the lawn mower.  He also built a ¼” scale steam engine for his oldest grandson to drive at the Tipton Steam Show.  His summers were spent teaching his children how to use a bow and arrow and shooting guns.  The winters were for making bullets, mussleloaders and amateur radios while drinking sassafras tea from the pot on the garage stove. We can still hear him laughing as he is trying to pull one over on someone.

Visitation will be 1-3 p.m. Thursday, November 19, 2020 at Goodwin Funeral Home, 200 S. Main St., Frankfort. Funeral service will follow at 3 p.m. at the funeral home. Burial will be in Green Lawn Memorial Park. Memorial donations may be made to Alzheimer’s Association. Out of respect for the health, safety, and comfort of all in attendance, guests will be expected to adhere to current CDC guidelines regarding appropriate social distancing and the wearing of masks.

He is preceded in death by his wife, Elva Zae (Denham) Reeder, parents, a son-in-law, Terry Jenkins, his brother, Doyle Reeder, and his sister Barbara Allen.