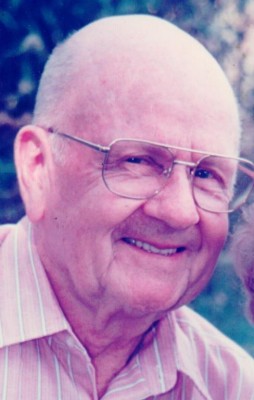 Donald I. Smith 96, of Frankfort, IN, died December 13, 2015 at the Clinton House and Rehabilitation Center in Frankfort, IN.  Born January 6, 1919 in Frankfort, to Jacob A. and Zora Ann (Weaver) Smith. He married Elsie Varner on December 3, 1941 in Hattiesburg, MS while he was stationed in the U.S. Army and she survives. Don graduated Frankfort High School in 1937. A Veteran of the U.S. Army, He served from Nov. 1940 to Oct. 1945. He was owner/operator of Clark’s Station on north Jackson St. in Frankfort, IN. from 1965-1980, and also worked at Chrysler in Kokomo and with his brother Carl at “Smitty’s Tune Up”. He was a member of the Moose Lodge, American Legion and the VFW.

Visitation will be from 1-3 p.m. on Wednesday December 16, 2015 at Goodwin Funeral Home. The funeral service will be held at 3 p.m. on Wednesday following the visitation with Emmett Ade officiating. Burial with military rites will follow at Green Lawn Memorial Park. Those wishing may contribute in Don’s name to the Moose Lodge of Frankfort.

7 Condolences for “Donald I. Smith”