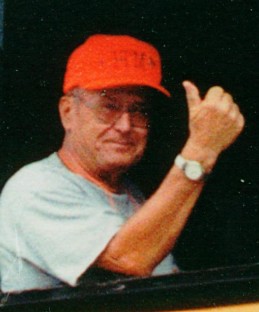 Donald Elmer Daily 80, of Frankfort, died December 15, 2014 at his home.  Born September 5, 1934 in Frankfort, Ind. to Earl H. & Girlene (Best) Daily. His marriage was to Margaret Walker Daily. They divorced in 2011. Mr. Daily was a 1952 graduate of Frankfort High School. He worked for the Norfolk Southern Railroad for 43 years, retiring in 1996. His memberships include, Elks Lodge, where he was Past Exalted Ruler, National Railroad Historical Society and was Vice President on the Board there and was a member of the Nickel Plate Railroad Society.

Visitation will be 4-7 p.m. Thursday, December 18, 2014 at Goodwin Funeral Home. Service will be 10:30 a.m. Friday, December 19th at the funeral home. Burial will be in Green Lawn Cemetery. Memorial donations may be made to the Indiana Transportation Museum in Noblesville.

by a sister, Marian Howland.