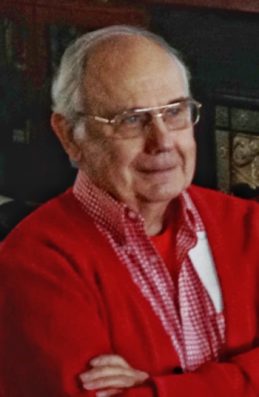 Claude Clinton Faust, 81, Forest, passed away unexpectedly at his home on Saturday, December 24, 2022.  He was born March 23, 1941 in Frankfort, the son of Claude D and Nellie B Messler Faust. Clinton was a 1959 graduate of Frankfort High School. Clinton married Thelma Louise Laughner on July 1, 1962 and they enjoyed a long and happy marriage of 48 years until Thelma’s death in 2010. After high school, Clinton attended Indiana Business College.   He worked for the Coca Cola Bottling Plant in Frankfort before starting a life-long career at the Chrysler Transmission Plant in Kokomo retiring in 2001. Clinton was an active member of the Clinton County Antique Machinery (Tractor) Club and the Indiana Allis Chalmers Tractor Club. He enjoyed driving his antique tractor in the Clinton County Fair Parade and antique tractor drives with the club. He loved attending the Chrysler monthly retiree meetings and dinners and traveling to Chrysler shareholder meetings. In retirement, Clinton derived great pleasure from managing the family farm which has been in the Messler/Norris/Faust family for well over 100 years. For many years Clinton and Thelma raised cattle and collies. They traveled throughout the Midwest enjoying festivals, concerts, live theater, the Indianapolis Colts and annually attending the Indianapolis 500. They were enthusiastic attendees of the Indiana State Fair. In his later years, he enjoyed watching sports on TV, especially IU basketball. He also enjoyed movies, dining out, attending local fish fries, church dinners and especially the coffee shops at the Forest UMC and the Forest Volunteer Fire Station. Clinton could best be described as a fun-loving, generous man who loved his family, his friends and his hobbies. In his own words, “family is everything”. Clinton was looking forward to 2023 and beyond with enthusiasm. He will be dearly missed by family members, former co-workers and friends.

Services for Clinton will be held on January 9, 2022 at 2pm at Goodwin Funeral Home, 200 S. Main St., Frankfort, with Rev. Phil Lake officiating. Visitation will begin at 12 Noon until the start of the service at the funeral home. Burial to follow in Green Lawn Cemetery. In lieu of flowers, donations may be made in Clinton’s memory to: Clinton County Antique Machinery Club, (c/o Jack Robbins), 3822 S SR 39, Frankfort, IN 46041 or the Clinton County Humane Society, P.O. Box 455, Frankfort, IN 46041, with envelopes available at the funeral home.