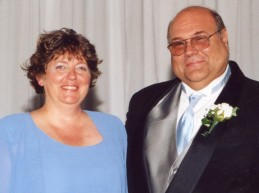 Chuck graduated from Clinton Prairie High School in 1970 and also attended Ivy Tech. He had previously worked for Wabash National and since 2001 was employed in maintenance at Frito Lay. Chuck’s pride and joy were his family and his 1970 El Camino.

Linda graduated from Frankfort High School in 1976. She started working at Frito Lay in 1981 and was a processing operator at the time of her retirement this past summer. Since her retirement, she had been working part time at Menard’s in Lebanon. She was a member of the Cornerstone Assembly of God. She enjoyed motorcycle riding and woodworking.

Visitation for Chuck and Linda will be on Thursday, October 29, 2015 at Goodwin Funeral Home from 2:00 – 8:00 p.m. and one hour prior to the funeral service at 11:00 a.m. on October 30, 2015 at Cornerstone Assembly of God, 5641 W. Mulberry Jefferson Road, Frankfort, Indiana 46041. Burial will be in Green Lawn Memorial Park. In lieu of flowers, memorial donations in memory of Chuck and Linda may be made to Cornerstone Assembly of God.

They have two children, daughter Andrea (husband Jeff) Kessner of Frankfort and son Michael D. Benefiel of Mulberry. They have one granddaughter Natalie Reef of Frankfort. Chuck is also survived by his parents of Fort Myers, Florida and a brother Gerald “Gary” (wife Beverly) Benefiel of Daytona Beach, Florida. Linda is also survived by her father and stepmother, George and Phyllis Clark of Attica, sister Darla (husband Harold) Harper of Frankfort and brother David (wife Julie) Clark of Lafayette.

a brother Brian Benefiel who died in December of 2004.