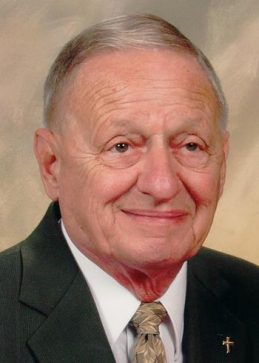 Carroll was a 1947 Frankfort High School graduate and a 1950 Lafayette Business College graduate.  A decorated Korean War veteran serving in the U.S. Army, where he was a recipient   of several honors including the Bronze Star Medal for gallantry and the Korean Service Medal with a Bronze cluster of three stars.  Carroll retired from Clinton County Bank & Trust Company and worked part-time for Goodwin Funeral Home for over 20 years.  A Lifelong member of the St. Matthew United Methodist Church, he served as past treasurer.  He was also a former member of Kiwanis, where he was past president, Frankfort Chamber of Commerce, where he was past treasurer, American Legion, where he was past finance officer. Other Memberships include the 40 &8, Clinton Masonic Lodge #54, Frankfort Moose Lodge #7,  past member of The Scottish Rite, The Murat Shrine, The Clinton County Shrine Club.  He also served several years as a director of the Clinton County Hospital and The Bunnell Cemetery Association.  Carroll was an avid Cubs fan.

Visitation will be Noon-2 p.m. Thursday, October 5, 2017 at Goodwin Funeral Home. Services will follow at 2 p.m. at the funeral home. Private family burial will be in Bunnell Cemetery. Pastor Phil Lake will officiate. The family wishes memorials to be made to the St. Mathew United Methodist Church, envelopes will be available.

He was preceded in death by a son, David C. Elliott and a grandson, Doug Elliott, and a sister-Betty Adams