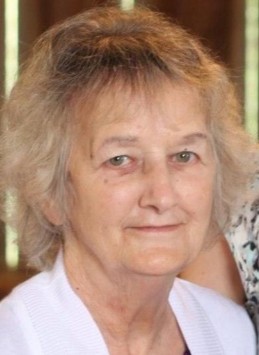 Carolyn R. Smiley, 73 passed away peacefully at 3 p.m. on November 11, 2015. She was born to the late John and Melva (Neice) Davids on February 25, 1942.  Carolyn graduated from Frankfort High School in 1960.  Carolyn married her best friend Albert W. Smiley on May 10, 1962 at Fort Sill, OK and he survives. Carolyn’s life passion was caring for and loving Albert, her children, and grandchildren. When Carolyn was not sitting at her sewing machine singing, she could be found baking sweet treats and wonderful meals. Carolyn was a lifelong member of the Clinton Chapter of the Order of the Eastern Star.

Visitation will be 4-8 p.m. Friday, November 13, 2015 at Goodwin Funeral Home with an Order of Eastern Star Service at 7:30 p.m. Services will be 10:30 a.m. Saturday, November 14th at the funeral home. Burial will follow in Kilmore Cemetery. Memorial donations may be made to St. Elizabeth Hospice.

her loving husband Albert, two daughters, Angela Hoshaw (Devin) of Lafayette, IN, Lisa Mitchell (Neal) of Frankfort, IN, one son, Robert “Butch” Smiley (Velma) of Wolcott, IN, as well as three grandchildren she adored, Brittany Lewis (Letteer) of Chicago, IL, Caleb Robertson (fiancé Hannah Pierce) of Lafayette, IN, and Erand Hoshaw of Mulberry, IN and two step-grandchildren, Austin & Brittany Gonzales of Wolcott, IN. She also leaves behind two brothers, John Davids (Jan) of Frankfort, IN and Robert Davids (Stephanie) of Anderson, IN.