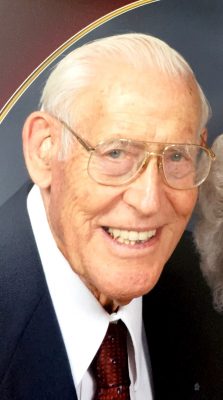 C. Ellsworth Biesecker 97 of Frankfort died at 4 p.m. Saturday, September 10, 2016 at Wesley Manor Health and Retirement Community.  He was born on March 25, 1919 in Clinton County, IN to Lee & Kathryn Rebecca (Paris) Biesecker.  Ellsworth married Edna Grace Davison on June 16, 1940 in Frankfort.  Grace preceded him in death on May 4, 2015.  Ellsworth was a lifelong Farmer, spending his entire life residing in and serving Clinton County.  Member of the First Evangelical Presbyterian Church (Past Elder and Deacon), Vesta Masonic Lodge #136 in Jefferson (65 year member, Past Master), Clinton County Council (1963-1967), County Commissioner (1973-1992), Clinton Prairie School Board (1968-1972), Clinton Prairie School Building Corp Secretary (1959-1985), Clinton County Fair Board (1967-1972), Awarded Clinton County Citizen of the year in 1971, Prairie Farmer Master Farmer in 1969, Indiana State Commissioners Association President in 1985, Region 4 Planning Commission, Herpic Board at Purdue University, Host of the Indiana Farm Management Tour in 1965 and was awarded with being a Clinton County Gem in 2007.

Funeral Services will be held at 2 p.m. Wednesday, September, 14, 2016 at the First Evangelical Presbyterian Church, 352 W. Clinton Street, Frankfort. Friends may visit one hour prior to services at the church. Pastor Paul Copeland will officiate. Burial will be in Green Lawn Memorial Park. Memorial donations may be made to the First Evangelical Presbyterian Church or Wesley Manor Good Samaritan Fund.

He was preceded in death by his parents, step mother: Margaret Biesecker, sister: Barbara Lane, 2 Brothers: Harold and Clyde Biesecker, half brother: Lee Biesecker and brothers in law: Glendene Hufford and Jack Lane.