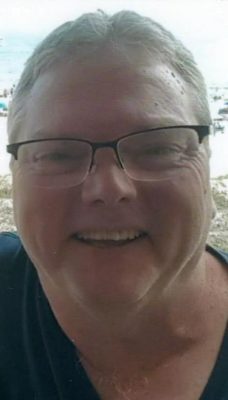 Brian was a 1977 graduate of Frankfort High School.  He lived in Anderson from 1982-1995 before moving to Michigantown.  He was a grocery manager, working at Ron’s Kwik Mart, Payless in Lafayette and Anderson and for the past 12 years, he worked for Schulz IGA in Frankfort.  He was a fan of Jimmy Buffett, Alabama Football and the Chicago Cubs and Bears.

A celebration of Brian’s life will be held at 3 p.m. Arborwood by Shoup’s, 100 Golf Preserve Lane, Frankfort on Friday, May 31, 2019. Following the celebration, family will receive friends until 7 p.m. at Arborwood. Memorial donations may be made to Physiocare Hospice, 625 S. Earl Ave., Suite D, Lafayette, IN 47904.

his first wife and his father.