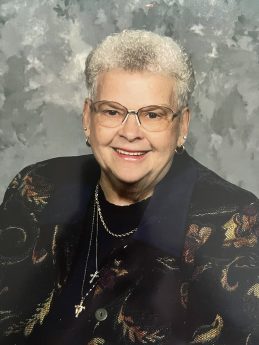 Bonnie was a 1952 graduate of “Little Jeff” high school, in Jefferson, Ind.  She worked at PR Mallory and National Seal for 10 years and was Office Manager at Jerry’s Body Shop for 25 years, retiring in 1996.  She was a member of Community Christian Church in Frankfort and enjoyed reading, doing crossword puzzles, and was an avid Cubs fan.

Memorial donations may be made in Bonnie’s honor to the American Heart Association or the Alzheimer’s Association, with envelopes available at the funeral home.

A Funeral Service will be held at 11:30 a.m. on Wednesday, September 7, 2022 at Goodwin Funeral Home, 200 S. Main Street, Frankfort.  Friends may visit 9:30 until the time of service at 11:30 a.m.at the funeral home. Entombment will be in the Chapel of Peace Mausoleum at Green Lawn Cemetery.

She was preceded in death by her husband, son: Darrell Stinson in 1997, Sisters: Patty Royer and Jean Kongas, and brother: Gerald “Moose” Mosson.