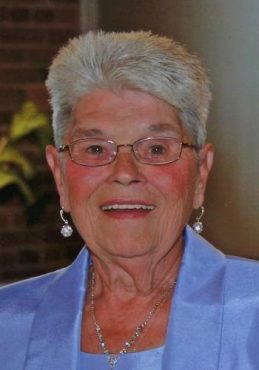 Bonnie Lou (Oyler) Meiers, 83, of Frankfort, Ind., passed away peacefully on Wednesday morning, March 13, 2019 at the Wesley Manor Healthcare Center in Frankfort.  Bonnie was born on February 24, 1936 in Camden, Carroll County, Indiana to Carey D. & Ursel E. (Angle) Oyler.  She married Howard Milton Meiers on May 5, 1954 in the Lower Deer Creek Church in Camden and he preceded her in death on August 6, 2008.

Bonnie spent most of her life as a Mother and homemaker.  She was a waitress at the Elks Lodge and worked for the P.R. Mallory Company from 1972-1983.  A 1954 graduate of Camden High School, she was of the Christian faith and liked to cook, sew, quilt and garden.  Her greatest enjoyment was attending her grandchildren’s sporting events.  Bonnie was also an avid Purdue fan.

Visitation will be from 5-8 p.m. Friday, March 15, 2019 and one hour prior to the service on Saturday at Goodwin Funeral Home, 200 S. Main St., Frankfort. Funeral celebration will be held at 2 p.m. Saturday, March 16th at the funeral home. Burial will be in Green Lawn Memorial Park. Memorial donations may be made to Frankfort High School Booster Club.

In addition to her parents, she was preceded in death by her husband.