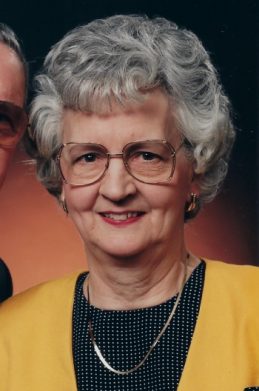 Beulah was a 1943 graduate of Mulberry High School and lived most of her life in Clinton County.  She had worked for Mallory’s for 27 years, retiring in 1987.  She was a 50+ year member of Jefferson United Methodist Church and sang in the church choir for many years. Beulah was a member of the OES Jefferson #592.  A Red Cross Volunteer, she was also a 20-gallon blood donor.  Beulah was a needlework enthusiast.

Visitation will be 9:30-11 a.m. Tuesday, January 3, 2023 at Goodwin Funeral Home, 200 S. Main St., Frankfort. Funeral services will begin at 11 a.m. at the funeral home. Burial will be in Green Lawn Memorial Park. Memorial donations may be made to Jefferson United Methodist Church.

In addition to her parents and her husband, she was preceded in death by 3 brothers, 1 sister and an infant daughter, Shirley Jean.