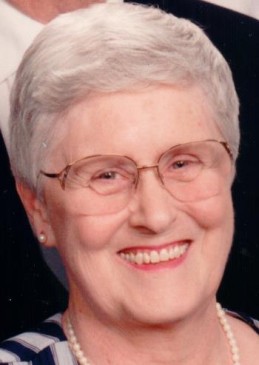 Betty Lou Barnes 90 of rural Frankfort, died at 7:15 p.m. Friday, March 11, 2016 at her home.  Born October 5, 1925 in Clinton County to Everett D. & Mary M. (Grover) Dunn. She married Earl D. Barnes on August 7, 1948 in Hillisburg United Methodist Church and he preceded her in death on March 25, 2006.  Betty grew up in Clinton County, lived in Winamac and Crown Point before returning to Clinton County in 1960.  She was a 1943 graduate of Scircleville High School and a 1947 graduate of Purdue University, and she sang in the Purdue Chorus.  She was a Kindergarten Teacher for Clinton Central School Corporation for 16 years.  Betty was a member of the Hillisburg United Methodist Church, past member of the Hillisburg UMC Women and Hillisburg Eastern Star, member of Johnson Township Homemakers Club and Delta Kappa Gamma Society.

Services will begin at 2 p.m. on Friday, March 18, 2016 at Goodwin Funeral Home. Friends may visit one hour prior to the service at the funeral home. Burial will be in Whiteman Cemetery. Memorial donations may be made to Clinton County Humane Society or Clinton County Cancer Society.

In addition to her parents and her husband, she was preceded in death by two daughters-in-law, Brenda Barnes and Kay Barnes.