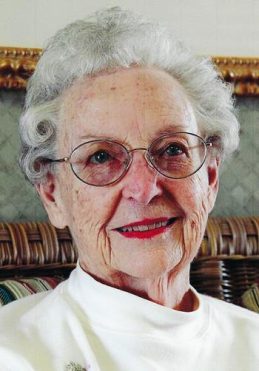 Anne (Young) Brooke Gordon Myers, 96, of Mulberry, died at 7:15 p.m. September 12, 2018 at Mulberry Health and Retirement Community.  She was born January 8, 1922 in Geetingsville, Ind. to Merton A. & Gladys (Shaffer) Young.  Her First marriage was to Dorwin Brooke, she then married Keith S. Gordon in Shelbyville, Ind and he preceded her in death.  Later in life she married Gerald “Curly” Myers and he preceded her in death.

Anne was a graduate of Michigantown High School.  She worked in interior design in Indianapolis, Ind., State Distributing for 12 years and Sears in Frankfort for 20 years. She was a former member of the First Christian Church in Frankfort and was currently a member of the Mulberry United Methodist Church.  She was also a member of DAR, BPW, Women of the Moose, Elks Auxiliary, and Colfax Eastern Star. She very much treasured being a member of the Freddie Shaffer All Girl Orchestra. In 2013, Anne was named a Clinton County “Gem”.  She also enjoyed playing music with her sister-in-law, Bev Young, they played an organ/piano duo.

Visitation will be 12 Noon to 1:30 p.m. on Sunday, September 16, 2018 at Goodwin Funeral Home, 200 S. Main St., Frankfort. Graveside services will be held following the visitation at 2 p.m. on Sunday in Geetingsville Cemetery, Geetingsville, Ind. Memorial donations may be made to the Fun Time Band, c/o Debbie Boe, 1300 Maple Court, Frankfort.

She was preceded in death by her parents, a daughter, Sue Hicks and was the last of 8 brothers & sisters.