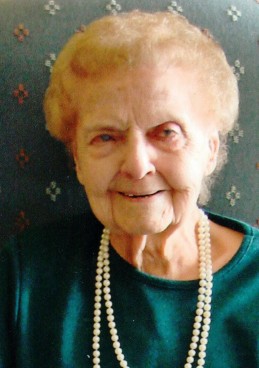 Alta May Stowers Clements, 102, a longtime Kirklin resident, died at 11:36 p.m. February 16, 2016 at Wesley Manor.  She had lived at Wesley Manor for the past 4 years. Born April 26, 1913 in Grant County, Indiana to Leroy & Minnie Melissa (Lede) Blessing.  She married Paul Stowers on May 18, 1947 in Marion, IN and he preceded her in death on July 20, 1978.  She then married Johnny Clements on June 27, 1982 in Kirklin Church of God and he preceded her in death on December 7, 1990. Alta grew up in Howard and Grant Counties, attended schools there before moving to Clinton County.  She worked at Commercial Filters in Lebanon for 7 years.  She had previously worked at Delco Radio in Kokomo, Indiana Bell in Frankfort, Kirklin and Kokomo and the elevator in Kirklin, retiring in 1975.  She was a member of the Kirklin Church of God, past member of Priscilla Club, Jolly Times Euchre Club, and Moose Lodge #7 Ladies auxiliary.

Services will be 11 a.m. Saturday, February 20, 2016 at Goodwin Funeral Home with visitation beginning at 10 a.m. until the time of service at the funeral home. Rev. Richard Pursifull will officiate. Burial will be in Oak Hill Cemetery. Memorial Donations may be made to Clinton County Humane Society or Cystic Fibrosis Foundation.

Alta was the youngest of 5 brothers and 2 sisters, who all preceded her in death.

5 Condolences for “Alta May Stowers Clements”