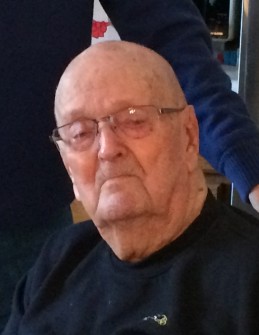 Alonzo M. Titus 98, a longtime Frankfort resident, died at 10:55 a.m. March 24, 2016 at Mulberry Health and Retirement Community.  Born September 27, 1917 in Boone County, Indiana to Herbert U. and Edith O. (Medlin) Titus.  He married Sybil J. Aldrich on July 12, 1943 in Cambria, Indiana and she preceded him in death on November 20, 1994.  Mr. Titus was a 1936 graduate of Lebanon High School.  A veteran of the U.S. Army, he served during WWII in Europe. He worked for the U.S. Postal Service, retiring on July 11, 1980.  Mr. Titus was a member of St. Paul’s Lutheran Church.  His memberships include; American Legion Post #12, a 50-year member and past master of Clinton F & AM Lodge #54, RAM Clinton Chapter, Frankfort Council, Frankfort Commandery, Scottish Rite and Murat Shrine, Murat Shrine Club, Clinton County Scottish Rite Club and past president of NARFE.  He was Mulberry Lutheran Home volunteer of the year in 1999, a determined Cubs Fan and an avid Purdue Basketball fan.

The funeral service will be 10:30 a.m. Wednesday, March 30, 2016 at Goodwin Funeral Home, 200 S. Main St., Frankfort. The Rev. Mike Crawford of St. Paul’s Lutheran Church will officiate. Family will receive friends from 4-7 p.m. Tuesday, March 29, 2016, with a Masonic Memorial Service beginning at 7 p.m. at the funeral home. Burial will be in Green Lawn Memorial Park. Donations in memory of Alonzo may be made to the Clinton Masonic Lodge,

2 Sons: Phillip L. (Carol) Titus of Henderson, NV, James R. (Ann) Titus of Quincy, IL, Grandchildren: Ray, Doug and Avery. The Titus family would like to recognize the special friendships Alonzo has made with his “Mulberry Family”, especially Esther Creamer and her family, as well as his neighbors, Dick & Wilma Howe.

two brothers and a sister.