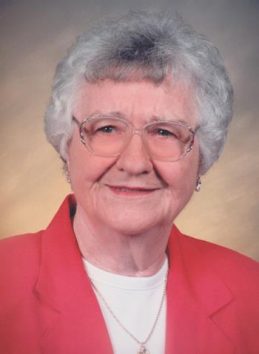 Alice M. (Taylor) Felty, 93, of Frankfort, Ind., passed peacefully with family by her bedside on December 29, 2017 at Clinton House Health and Rehabilitation Center.  Born September 18, 1924 in Lafayette, Ind. to Jesse Newton & Frances Pearl (Detty) Taylor.  She married William Thomas Felty on April 7, 1944 in Lafayette and he preceded her in death on June 23, 1977. Mrs. Felty attended Lafayette Jefferson High School, grew up in Lafayette and moved to Frankfort in 1944.  She worked at National Seal, (Federal Mogul) for 24 years, retiring in 1990.  She had previously worked at Spencer’s, Woolworths, Del Monte Canning Company, and Frankfort School Cafeteria.  Alice was a member of the First Baptist Church and a 50-year member of Women of the Moose.

Visiting will be 4-6 p.m. Tuesday, January 2, 2018 at Goodwin Funeral Home, 200 S. Main St., Frankfort. Funeral services will be 10:30 a.m. Wednesday, January 3rd at the funeral home. Burial will be in Green Lawn Memorial Park. In lieu of flowers, donations may be made to the Clinton House or First Baptist Church.

In addition to her parents and her husband, she was preceded in death by four brothers, two sisters, two sons, Randall Lee Felty and William Earl Felty and a grandson Travis Felty.