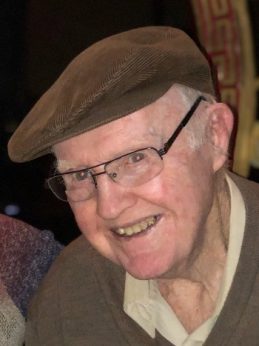 Stuart ‘Red’ Ghere, 90, of Frankfort, IN, passed away following a brief illness on November 14, 2018 surrounded by his family. Stuart was born on December 30, 1927 in Frankfort, to Clifford T. Ghere and Amanda Tot (Stewart) Ghere.  He married Carole A. Cox on February 24, 1962 in Frankfort, IN and she survives.

Stuart graduated from Colfax High School in 1945.  He played baseball and basketball during is younger years and refereed local basketball games.  Friends that played baseball with him often said he could pitch a baseball through a knothole in a pine board.  Stuart was a lifelong dairy farmer.  He also served as the Clinton County Highway Superintendent and school bus driver for Clinton Prairie Schools.  Stuart and his wife Carole moved to the Dayton, Ohio area in 2001 to be closer to his grandchildren.

his parents and a brother, Clifford T. Ghere, Jr.