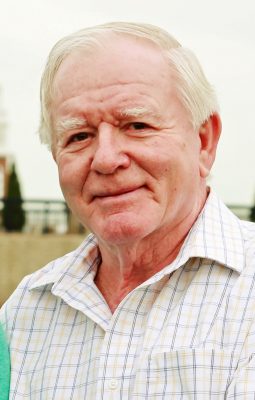 Roy C. Ferguson, 81, Kokomo, went home to be with his Lord and Savior Jesus Christ at 10:15 a.m. on Friday September 22, 2017 at home, surrounded by his wife and family. Roy was born in Tompkinsville, Kentucky on April 11, 1936 to the late William Denton and Irene (Fish) Ferguson. The family moved north and settled in Clinton County Indiana.

Roy was a 1956 graduate of Frankfort High School. On July 27, 1956, he married Marilyn J. Everman at Trinity United Methodist Church in Frankfort. They lived in Frankfort, Lafayette, and Tipton, Indiana before moving to Kokomo in 1965.

Roy worked for National Homes in Lafayette during the late 1950’s where he learned his carpentry vocation. Additionally, he was employed as a milk carrier in Tipton during the 1960’s, a route supervisor with Dietzens bakery in Kokomo during the 1970’s, before spending 30 years in the carpentry trade and retiring as a member of the Carpenters Union Local 615. Roy was a highly sought after and respected craftsman. He stated that his most rewarding professional accomplishment was realized with his work involved in the construction of Family Worship Center church located on Center Road in Kokomo.

Roy and Marilyn were avid travelers having visited all 50 states, as well as the countries of Mexico and Brazil.  In retirement Roy and Marilyn travelled in their RV to several NASCAR venues, as well as wintering in Port Aransas, Texas before settling in Apache Junction, Arizona where they developed lifelong relationships.

Roy was a faithful servant of God openly sharing his personal story, and Christ’s love with others. He was a 35-year member of the Family Worship Center where he served proudly as an Elder to Pastor James Bradley and the congregation of the church.

Roy was an honored husband, dad, papaw and pap who was selflessly devoted to his family. He enjoyed teaching, leading and serving as wise counsel to his children, grandchildren and great grandchildren. A personal bond was developed with each of them through his tireless sacrifice and unconditional love.