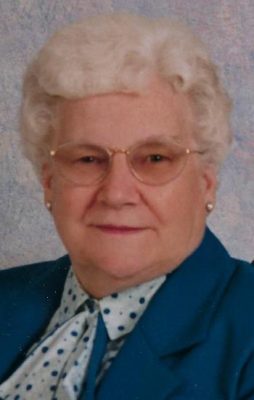 Mrs. Smith was a 1941 graduate of Jackson Township High School and was a lifelong Clinton County resident.  A homemaker, she also worked at Freedman’s Department Store and made airplane turrets during WWII.  She formerly attended Scotland Christian Church and the First Evangelical Presbyterian Church.  She was a Pink Lady volunteer at the Clinton County Hospital, enjoyed camping at Old Mill Run Campground and was an avid Pacer, Colts and Butler fan.

Visitation will be 9-10:30 a.m. Saturday, October 19, 2019 at Goodwin Funeral Home, 200 S. Main St., Frankfort. Funeral Celebration will begin at 10:30 a.m. at the funeral home. Burial will be in Green Lawn Memorial Park. Memorial donations may be made to Special Olympics of Indiana or Riley Hospital, envelopes will be available.

In addition to her parents and husband, she was preceded in death by a great grandson, Luke, five brothers and 2 sisters.