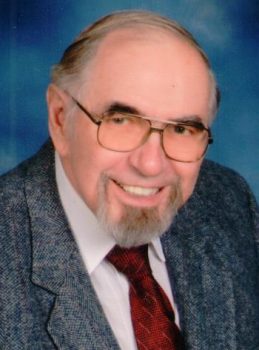 Ron was a 1951 graduate of Buffalo High School in Buffalo, Ind., was a graduate of Manchester College in 1965 and received his MLS Degree from Rosary College in River Forest, Ill. in 1969.  A veteran of the U.S. Air Force, he served from 1952-1955 in Japan and Korea.  He was nominated for the first class at the Air Force Academy by Sen. Charles Halleck.  Ron was a library cataloger and worked for the Fort Wayne Public Library from 1965-1979 and the Frankfort Public Library from 1979 until his retirement in 1997.  He was a member of the First Evangelical Presbyterian Church in Frankfort, where he was in the choir, was an elder and librarian for the church.  An avid bowler, he won the Frankfort men’s single’s city bowling tournament in 1991.  Ron was also a longtime Cubs fan.

Visitation will be 10-11 a.m. September 1, 2017 at Goodwin Funeral Home, with the funeral services beginning at 11 a.m. at the funeral home. Family burial will be in IOOF Riverview Cemetery, Monticello, Ind. Memorial donations may be made to the Wesley Manor Good Samaritan Fund or the First Evangelical Presbyterian Church.