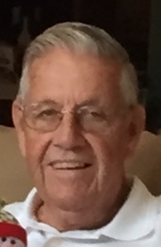 Robert LeeRoy Rader 83 of Leesburg, Florida went home to be with the Lord on August 21, 2017.  Bob was born on July 18, 1934 in Kirklin, Indiana to Cecil Rader and Ann (Allison) Rader.  He married Janet Sharp on August 15, 1970 and she survives.  He was a milkman for Frazier Dairy for many years and worked in sales.  Bob and Jan were the prior owners and operators of the Hillbilly Inn in Branson, MO before retiring to Florida.  Bob was a member of the First Baptist Church and was an avid golfer in his later years.

In addition to his parents he was preceded in death by a daughter in law Robin Rader, 2 sisters, Imogene Hoffman and Maybeth Dirks.