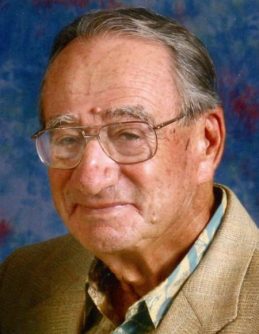 Robert D “Bob” Robertson, 89, of Frankfort, died peacefully February 14, 2018 at I.U. Health Arnett Hospital, Lafayette, Indiana with loved ones at his side.  He was born in Clinton County to William B. and Dortha (Alter) Robertson.  He married Patricia M. “Pat” Rowe, the love of his life, on May 22, 1949 in Frankfort and she preceded him in death on October 30, 2012.

Bob was a graduate of Frankfort High School in 1946 and attended Purdue University for two years. He then married Pat and farmed near Forest, Indiana for nearly 30 years – The last ten of those years, Bob was also the Farm Bureau Co-Op Hillisburg station manager.  While living in the Forest area, he was an active member of the Forest Methodist Church and the Forest Chapters of the Masonic Lodge and Eastern Star.  They moved to Florida in 1978, starting on Sanibel Island, then Fort Myers.  They returned to Frankfort in 2012.  An active private pilot for much of his life, he was a member of the International Flying Farmers, Academy of Model Aeronautics and Clinton County Pork Producers.  While living in Fort Myers after retirement, Bob was involved in many local volunteer organizations, including Habitat for Humanity, the Sanibel Library, Lee County hospital volunteers and a local soup kitchen.  He was a skilled handyman, an avid woodworker, and enjoyed working on projects in the wood shop at Wesley Manor.  Travel with close friends and family was a favorite pastime, with England being an especially beloved destination.  Bob’s other activities included canoeing, sailing, golf and tennis.

A memorial service and dinner will be held at Forest United Methodist Church, Forest, Indiana Saturday, February 24, 2018 at 11:00 a.m. Burial will be in St. Paul Cemetery, Forest, Indiana at a later date. In lieu of flowers, Bob's family would appreciate donations being made in his memory to the Salvation Army, 300 W. Washington St., Frankfort, the Wesley Manor Good Samaritan Fund, 1555 N. Main St., Frankfort, or a charity of the donor's choice.

In addition to his parents and wife, he was preceded in death by a brother, David A. Robertson and a sister, Betty Robertson Ransom.