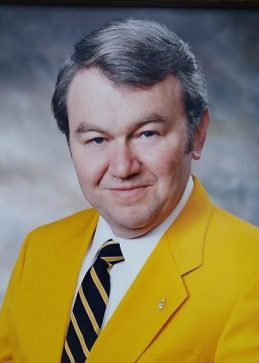 Dick serviced in the U.S. Army from 1963-1967 and was honorably discharged with the rank of SP/5.  While in the Army, Dick traveled to France working as a photographer.  Upon his return home, Dick married Nancy Sue Crum on September 14, 1968 and they had two children, Matthew Alan Withrow of Frankfort and Susan Kate (Brett) Henrikson of Lafayette and they survive along with grandchildren, Trevor Lee Walters, Katie Sue Walters and Sophie Ann Henrikson.

Dick spent 27 wonderful years with his soul mate, Linda Sue (Taylor) Seibert and she along with her children Kyle C. (Lori) Seibert, of Monon, and Joni (Tom) Pearcy, of Michigantown and grandchildren. Dick and Linda lived on Lake Freeman surrounded with lifelong friends.  They share their love with their beloved dog, Missy.

Dick was an active member of the Moose Association, serving as Pilgrim of merit, governor and Indiana State President of the Indiana Moose Association.  Dick opened Photography by Withrow, and for the next 40 years, he captured many childhood memories, school functions, weddings and families on film.  Most know Dick through his amazing talents as the photographer that recorded their life memories, his creativity with a camera knows no bounds.  His advertisements are considered the first “selfie” and are fondly remember by the people of Clinton County.  Dick loved fishing, mushroom hunting, a good movie and a better joke.  His humor will be remembered fondly by those fortunate to have called him “friend”.

He is preceded in death by his parents, his brother William Robert Withrow, his beloved grandparents and 3 grandchildren.