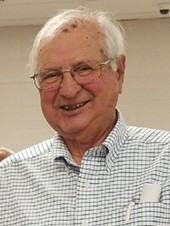 Myron was a 1953 graduate of Ashley High School, earned his BS in Agricultural Education from Purdue, and his MBA from Indiana Wesleyan University.  He was in the United States Army from January 1955 to October 1956, where he participated in “Operation Sage Brush” and also served in Germany during the Korean War.  He retired as District Sales Manager in the agriculture seed business.  He then taught computer and business classes at Purdue University and Ivy Tech.  Myron was currently on the Board of Directors for Farm Bureau, was a former member of the Lafayette Breakfast Optimist Club, a former member and past president of the Dayton Optimist Club.  He coached Lafayette Pony League Baseball for 10 years, was a member of the Tippecanoe Purdue Ags, American Legion, FFA, and had been an eight-year member of 4-H.  He enjoyed trail riding horses, supporting his grandchildren in 4-H horse shows, gardening with his children and grandchildren, vacationing all over the US, and his coffee group at the Mulberry Pizza King.

Memorial Donations may be made in Myron’s honor to the Frankfort VFW to benefit disabled county veterans, 309 N. Main Street, Frankfort, IN  46041.