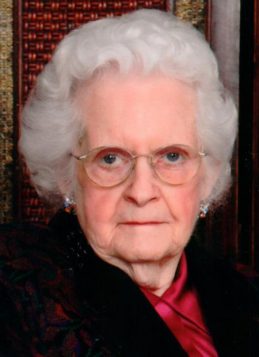 Mildred W. Davis 96, of frankfort, Ind., died September 16, 2016 at Wesley Manor Health and Retirement Community.  Born February 11, 1920 in Hendrix County, Ind., to the late Otis A. & Helen (Millikan) Ward.  She married Herman Davis on January 17, 1941 in Thorntown Methodist Church and he preceded her in death on March 9, 1996. Mrs. Davis was a 1938 graduate of Lebanon High School.  A homemaker and farmwife, she also worked at Mann’s Turkey Farm.  She attended Colfax Christian Church, was a member of Browns Wonder Christian Church, northeast of Lebanon, since she was 10 years old, member of Modern Mothers Club, and AIM Extension Homemakers.  Mildred was an excellent seamstress and loved gardening and flowers.

Visitation will be 10 a.m.-12 Noon, Wednesday, September 21, 2016 at Goodwin Funeral Home. Services will follow at 12 Noon at the funeral home. Burial will be in Plainview Cemetery, Colfax. Memorial donations may be made to the Antioch Church Building Fund or the Salvation Army; envelopes will be available.